Minneapolis Public Schools has recently announced its desire to drastically shake up where most students attend school and how they get there in a program they're calling Comprehensive District Design. (Full disclosure: I have a child in a district school, one that we selected in part because of its K-8 structure and diverse student body, and I used to be an MPS teacher. I agree with the goals of strengthening neighborhood schools and reducing inequity and school segregation. I'm coming out against CDD not because I think it will harm my child--not that anyone should EVER have to apologize for advocating for their child--but because I believe it's a bad move for MPS and is unlikely to further its stated goals.) District administration is billing this as an urgent equity issue; if you want to sell more food you label it "all-natural" or "gluten-friendly," and if you want an education reform measure to gain traction, you claim that it's all about equity, whether or not it really is. Lip service to equity is the coin of the realm in any education policy discussion.

The core feature of CDD (or, at least, the most disruptive one) is a boundary study that proposes relocating about 63% of the entire MPS student body, along with the elimination of all K-8 programming and a shuttering or realignment of most, if not all, magnet schools. The scale of this change alone should be enough to prompt skepticism--families build their lives around school routines, adjusting careers and living arrangements--but it turns out there are a number of other reasons to be suspicious of CDD: 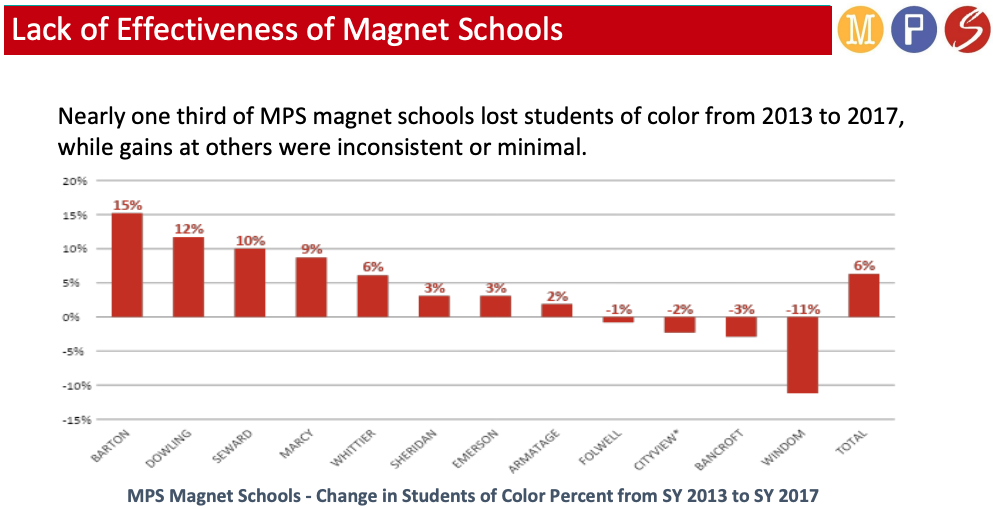 Never mind that the slide title ("Lack of effectiveness of magnet schools") is attached to a chart that contains absolutely no data on any measure of school effectiveness! A more accurate chart subtitle would be "Nearly half of MPS magnet schools gained students of color from 2013 to 2017, while only one had a substantial loss." This leaves aside other, more fundamental questions, such as: What's going on in the magnets that is working (or not) to fight segregation? How many students are represented by these schools? Why are families choosing or leaving them? Are these percent changes being caused by students of color leaving, or by white students enrolling, or the inverse? Instead of using the data to address intereting questions, the chart and its misleading title are simply presented without comment as if the data speaks for itself. Here's another one: 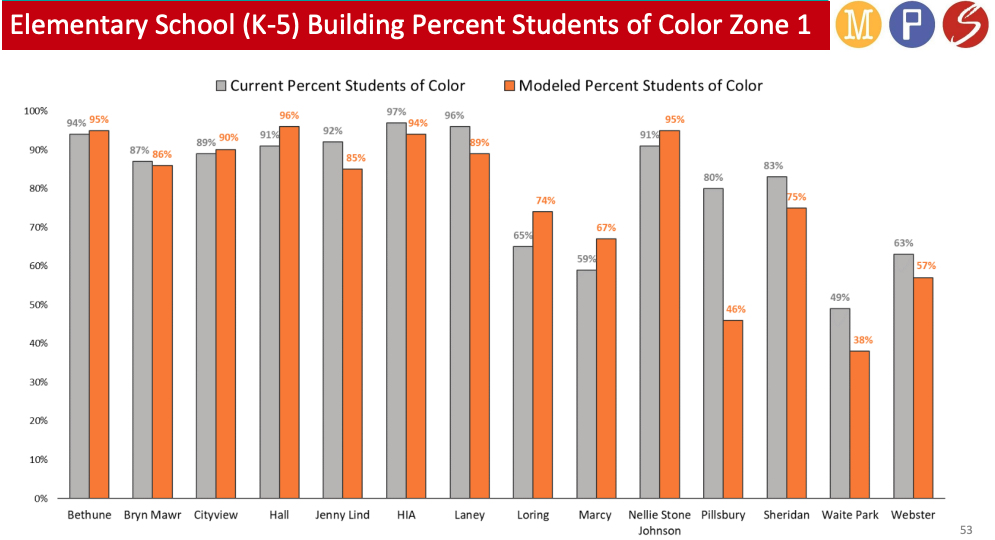 "Zone 1" is North and Northeast Minneapolis, the region of the school district with the highest rate of students open-enrolling out of district or into charter schools--at least one-third (!) of all resident school-age children. (Full disclosure: it's also where I live and where my son attends school.) The most segregated schools on this list would barely shift in their demographic makeup. A few of them would, by virtue of very small changes, inch across an artificial statutory threshhold that would cause them to no longer be considered "racially identifiable" (although still obviously segregated by any realistic or reasonable standard when compared with the demographics of the city at large). Next, let's look at how this would affect the city's weathiest, whitest schools, those concentrated in the Southwest corner: 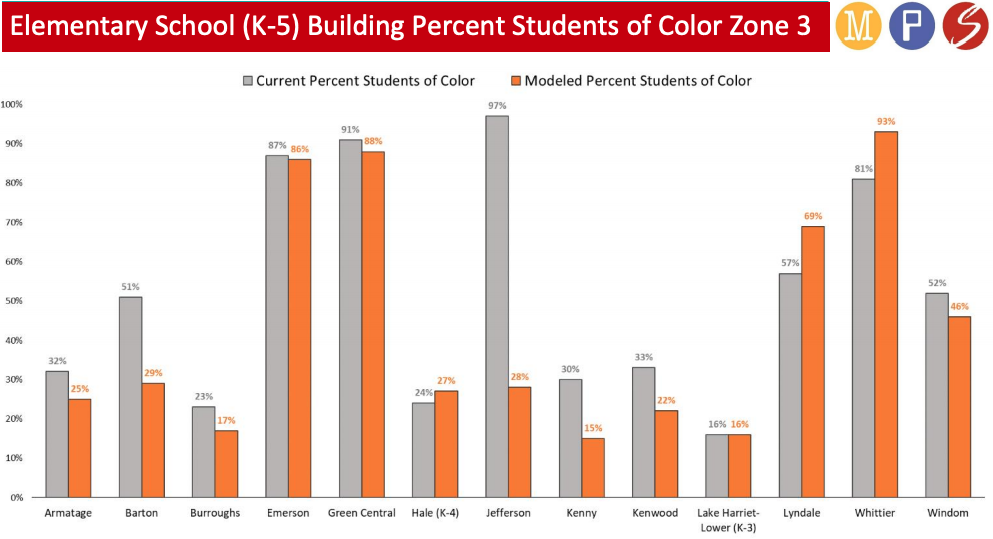 Armatage, Burroughs, Kenny, and Lake Harriet are the four elementary schools in the affluent Southwest; the rest of the South Side schools on this chart are located farther north and east, in more diverse tracts of the South Side. Guess what: the district's four whitest elementary schools get even whiter! (Or stays the same, in the case of Lake Harriet.) Why would the District put forth a design that actually worsens school segregation and then call it an equity plan? 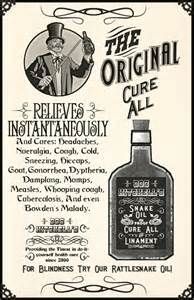 Anyone who says "doing nothing isn't an option" as a defense of a large, sweeping, disruptive change is being intellectually dishonest. A "sense of urgency" is no substitute for good judgment. The district has failed to make a compelling case for CDD, and trying to pigeonhole critics as do-nothings is a sign of a weak argument.

In summary, CDD promises massive disruption in the service of noble goals, but provides no plausible mechanism for furthering those goals, while at the same time posing real risks to the viability of the district itself. We are not Silicon Valley. The opposite of "move fast and break things" is "move deliberately and fix things". Let's start there.