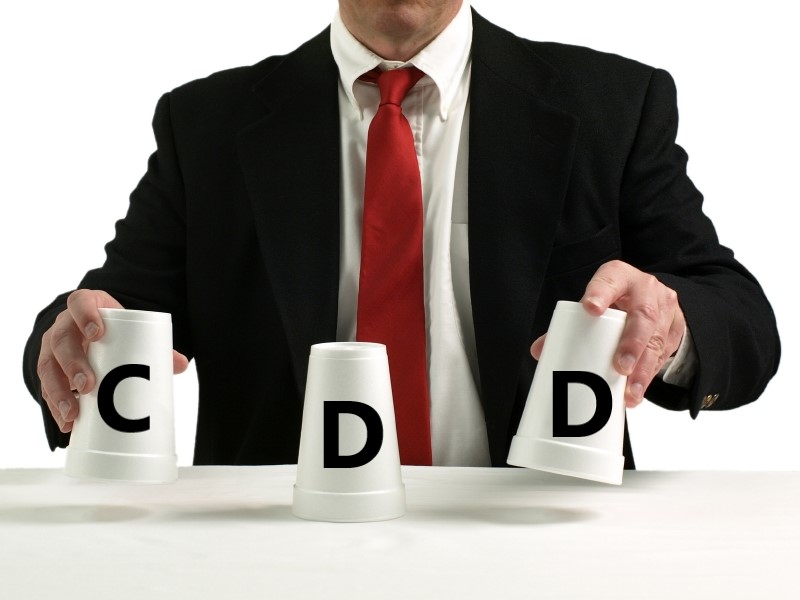 Minneapolis Public Schools held their first public info session last night on Comprehensive District Design (CDD), which is being marketed as an ambitious school desegregation plan. The district claims that, by changing attendance zones, eliminating K-8 programming, and making a number of other fairly drastic changes, six "Racially Identifiable Schools" will no longer be categorized as such. There's a big problem with the plan, though: the CDD boundary changes will actually increase the number of MPS students who attend segregated schools. In fact, you can prove this relatively easily using MPS's own data.

To understand how this is possible, we need to pick apart the MPS administration's misleading claims about the impact of the proposed changes. The most disingenuous--but also the most flagrant--bit of misdirection is when MPS sets a goal based on number of school buildings instead of number of students. School buildings are just bricks and mortar. The MPS presentation doesn't show us how many kids are desegregated--only how many buildings.

The other big lie that the CDD case rests on is that the definition of a "Racially Identifiable School" (RIS) has any useful meaning in the real world. The definition comes from a state statute, and any school that overrepresents non-white students by 20 percentage points or more relative to the student population of the district as a whole. For example, if MPS students district-wide are 66% non-white, then a school that's 86% or more students of color is considered a RIS:

(click on images to expand; source for all slides is here)

At first glance, this distinction appears relatively unimportant; after all, the proposed change would drastically reduce the disproportional representation at most of these schools. But let's look a little closer at Anishinabe/Sullivan. These are currently two separate schools (Anishinabe Academy and Anne Sullivan School) that share a physical address in South Minneapolis. It's unclear from the report if they would merge under the plan or if they are just listed this way for reporting purposes; in any case, MPS appears to consider them a single school site here. The CDD model claims that the proposed Anishinabe/Sullivan (henceforth A/S) will have 84% students of color. This number is alarmingly close to the statutory 86% threshold, which raised my index of suspicion for numerical gamesmanship, data massaging, and manipulation.

It is intellectually dishonest for MPS to represent A/S  as anything other than a segregated school, for several reasons:

I have not done the math on any MPS schools with this formula, but it's easy to imagine the results diverging from the statutory definition for schools that are close to the threshold. The point is that school segregation is a slippery thing to pin down, and it's hardly the only legally important concept where the most useful definition may be "I know it when I see it".

Despite MPS's application of an arbitrary statutory criterion that A/S just barely (and only maybe) meets, it remains a racially segregated school by any reasonable definition. It turns out this matters a great deal because this is the bit of mathematical deception that supports the rest of the case for CDD. MPS didn't include numbers of students in its presentation--only percentages--but these can be calculated using another slide buried near the bottom: 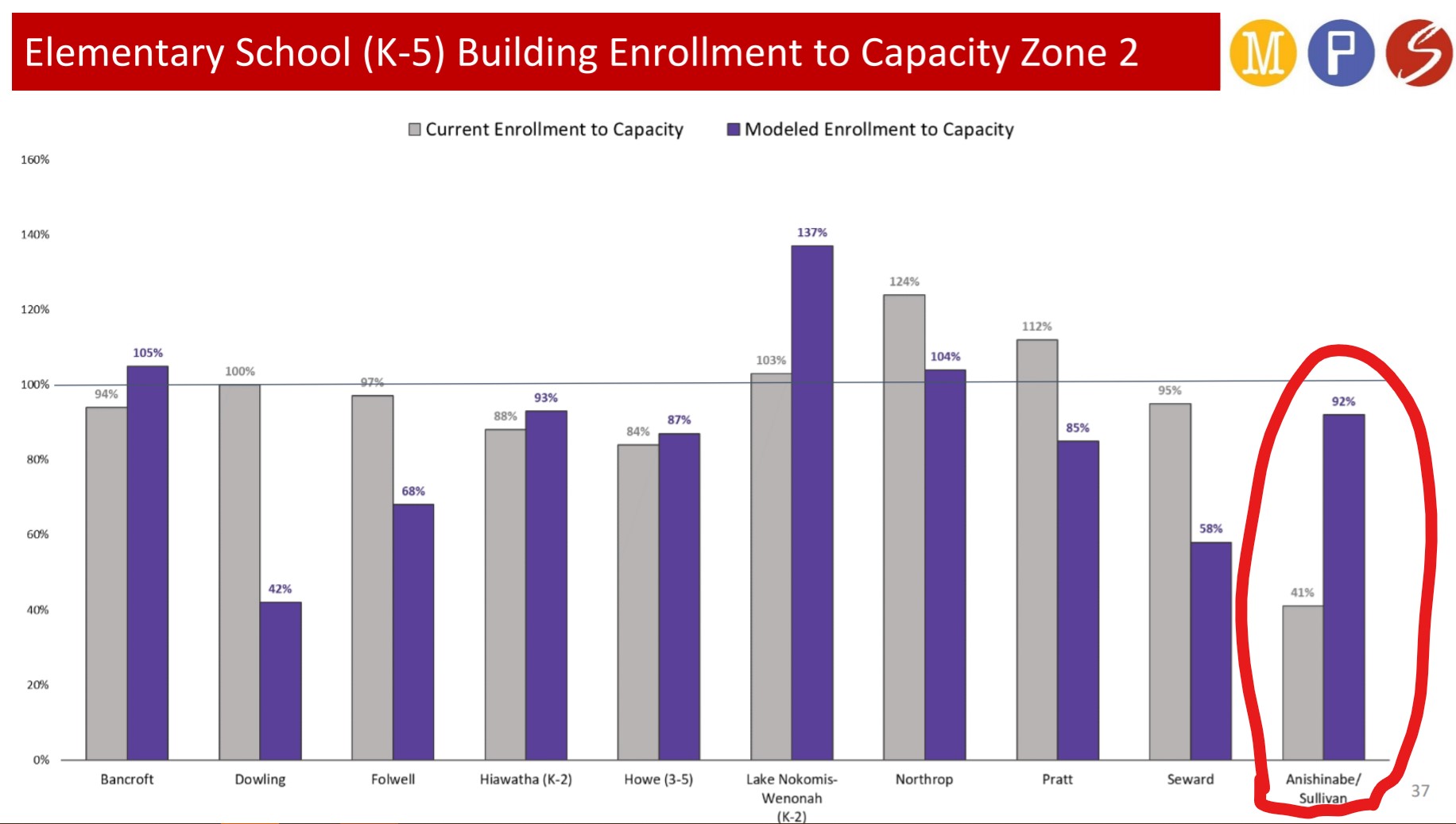 You can look up a school's current enrollment on the MDE website. (This is the source I used for all enrollment calculations going forward, mostly because the figures in the CDD presentation don't always agree with each other.) MPS says A/S is currently enrolled to 41% capacity, and MDE says they together have 842 students. This means it has capacity for 2053 students; if it's modeled to be 92% full, then 1046 more students will end up there. I used the same method to calculate projected enrollment changes at all of the racially identifiable schools, because what we should really care about is how many STUDENTS will be reassigned to attend segregated schools, and how many will be removed from them. I've attached my calculations to the end of this post so you can check my math. The general trend is that while some newly desegregated schools are being created, students are also being moved out of them and into existing segregated schools. At the same time, affluent, predominantly white Southwest Minneapolis schools generally become even whiter, and their enrollments increase, while enrollments at popular integrated schools around the city decrease--if they even stay open.

It's difficult or impossible to track individual children as the move into or out of schools under the CDD proposal, but what we can do is estimate the number of students who would no longer attend segregated schools, and the number that would be reassigned to attend segregated schools. Let's say we give the district full credit for integrating the schools (except A/S) that come off the "racially identifiable" list. Pillsbury, Sheridan, Folwell, Jefferson, and Anwatin end up with a total projected enrollment of 1900 using the methodology explained in the previous paragraph; however, this number comes with a loss of 547 students from those schools relative to their pre-integration enrollments. Meanwhile, schools that remain segregated (Bethune, Jenny Lind, Andersen, A/S, Bryn Mawr, Green, Lucy Laney, Hall, Nellie Stone Johnson, and Olson, nearly all on the North Side) increase their enrollments by 2274. At the same time, the new racially identifiable school created by the model (Whittier) has a projected enrollment of 747.

The bottom line: Schools that become desegregated under the CDD plan lose 574 students (resulting in a total projected enrollment of 1900), while schools that remain (or become) segregated would increase their student populations by 3021. (Presumably some of these students are the same individuals!) Even if you don't count the massive A/S increase, you have a relative toss-up of around 2000 students entering and leaving segregated schools. This means CDD is an unmitigated failure as a school integration plan even if you allow MPS their most optimistic assumptions (for example, that every reassigned student will actually attend their new school).

MPS is playing a shell game with children by moving large numbers into a single segregated school that only just barely meets the strict legal definition of "non racially identifiable".

CDD creates a handful of meaningfully desegregated school buildings, but the moves large numbers of students out of them.

CDD increases the net number of MPS students attending segregated schools (or, in the best case scenario, doesn't change it).

CDD disrupts the lives of 63% of all MPS students without furthering any greater good.

There are lots of other reasons adopting CDD would be a bad idea.

I encourage you to contact the MPS School Board and let them know how CDD actually results in more students attending non-integrated schools. Other ways to get involved: join the Minneapolis Public School Families for Equity Facebook group, contact savek8mps@gmail.com to join the mailing list, and sign our petition (English, Somali, Spanish).